Road to the Falls

I’ve been wanting to get out and practice using the neutral density filters more so decided to visit Butte Creek Falls. Last year I purchased “Hiking Waterfalls in Oregon” written by Adam Sawyer at Costco.  It’s a great reference for finding falls within a reasonable distance for a day outing.  We checked the directions and other information in the book against some internet sites.  Obviously some directions were better than others, but it was easy to find and we were able to drive directly to the falls.  The last 4 to 5 miles is a gravel/washboard road, however most vehicles will make it just fine.  The washboard is fairly minor compared to others I’ve experienced.  There is a section of one lane road that feels more perilous than it actually is from the driver’s perspective as it winds around and overlooks the hill.

The Trail and Falls

The hike is on a beautiful .9 mile, easy loop trail, with a couple hills, and the lush green foliage and shade were much appreciated on a hot July day.  The straight part of the trail leads to the lower falls, but we weren’t able to get to its base.  We saw some people go down the side of the rocky hill to get there, but we chose not to do that with our camera equipment.  Another family came along and opted not to go down as well.  Those who are more adventurous have the falls and pool all to themselves!

Then we took the loop trail to the upper falls which were easily accessible, and several families were playing in the water.  It wasn’t as crowded as other falls tend to be, and we were able to get the photos we wanted.  On the way out of the loop trail I saw another view of the upper falls I didn’t see going in.  I’ll have to go back and photograph it with the neutral density filter.

Rock Steps in the Trail

Visiting Butte Creek Falls is well worth the scenic drive through farm country and the gravel roads.  It’s about an hour from Portland depending on your starting point.  On the way out we stopped at a farm stand and purchased fresh picked blackberries and strawberries and then finished our day with strawberry shortcake for desert!

We’ve been on vacation for a couple weeks and didn’t have access to internet for much of that time, so I haven’t posted in a while.  I’ll begin with our weekend in Irrigon and follow up with some posts about our California trip.

We experienced the most awesome weekend in Irrigon visiting with my cousin Laurie and her family! Irrigon, as with most of the surrounding area, is largely farmland, and the beach house was parked just outside Laurie’s property with a view of horses out our front door.  Country noises of farm animals and frogs were a welcome change to the city’s sirens and constant traffic.  I think we saw only a couple cars drive by the entire weekend!  What more could anyone ask for in a boondocking spot? 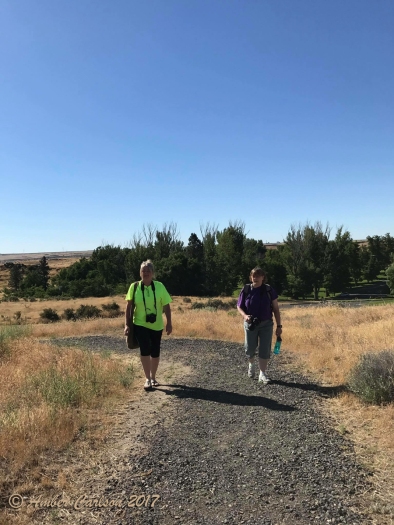 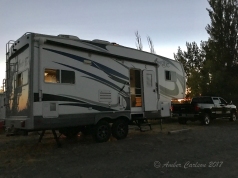 Boondocking in Irrigon, OR 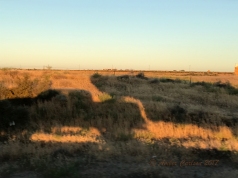 Shadow of Truck and Trailer

Info about Lewis and Clark

The main purpose of our excursion was to deliver a Nikon D7000 that I helped Laurie purchase for her daughter’s birthday.  We did two photo shoots with Tresa’s six beautiful children who were absolutely a joy to work with!  The morning shoot was done at Hat Rock State Park.  The sunlight was beautiful, and we were able to get some great photos of the kids in tall grass, in the trees and on some logs.  The kids also wanted to take photos on a bridge that worked out perfectly.  After a potluck dinner we took the kids to a beach near a wildlife refuge for a sunset photo shoot.  We captured some 4th of July photos as well as shots of the kids playing in the water.  Unfortunately, the filter on my lens had marks on it and resulted in sun spots on many of the photos.  I’ll have to go back and do that photo shoot again.

Kids at Sunset on the Columbia River

A at Hat Rock State Park 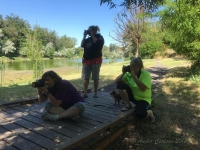 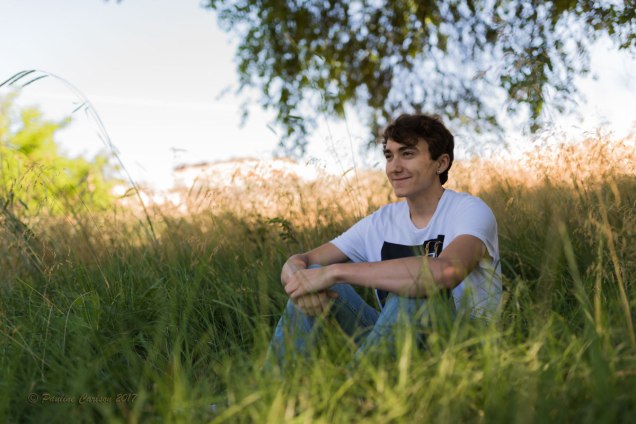 R in the Grass

Kayaking on the Columbia River

The plan for Sunday was to go kayaking, and I let Laurie know that since our kayaks are inflatables, I prefer to kayak on calm water such as lakes and ponds.  Tresa suggested Warehouse Beach, so off we went to Wallula Lake.  Little did we know that this “lake” is part of the Columbia River!  It doesn’t actually meet the formal definition, but resembles more of an inlet or bay.   At that point I couldn’t back out so went for it.  The lake’s configuration resulted in rougher waters with waves that crashed over the top of my kayak before I was able to get myself or the dog in.  Amber, on the other hand managed to stay dry getting into her kayak. And then Laurie in all her cousinly love thought to catch my plight on her phone and post to Facebook!  Oh well, it was fun and the water with the cool breeze felt wonderful in the 100 degree weather. 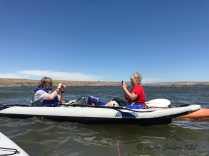 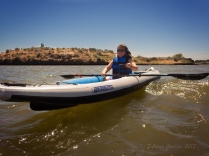 Amber Kayaking on the Columbia River

Kayaking on the Columbia River

I had not previously kayaked or done anything else on the Columbia River, but it was very peaceful and the serenity of the river and birds was much appreciated.  I like to imagine people’s lives in earlier times and could see Lewis and Clark paddling down the Columbia to the Pacific Ocean.  I’m sure it was much rougher and more challenging when they made the journey.  While I was hesitant to take an inflatable kayak onto the river, I would highly recommend paddling on the Columbia if you have the opportunity.